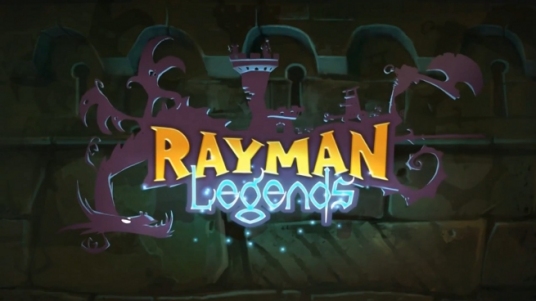 Rayman Legends is an upcoming platformer for the Wii U that follows the exploits of Rayman and his friends. The game supports up to 5 players simultaniously as they explore various worlds, destroying enemies and freeing captured creatures. The game is considered a sequel to Rayman Origins, which was received highly for it's interesting new approach to platforming.

With the sequel being released in Q1 2013, we got in touch with the developers of the game and asked them what we could expect from this exciting sequel! 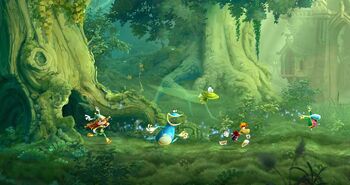 What are some unique ways that you utilize the GamePad screen?

The game can be played with different controllers, and the GamePad screen is one of them. Players can utilize any of the four main playable characters while using the Gamepad. The GamePad screen will directly reflect the visuals on the main television screen, and if you’re using it to control characters it can give you visual hints about how to progress throughout the level, especially if you’re playing as Murfy. Platforms can be moved by tilting the GamePad, and other touches like that.

Can you tell us a bit about the process of sound design in Rayman: Legends?

The sound designers and composers were involved from the very beginning, and it has always been a very collaborative effort. Giving feedback at every stage of the development cycle. The sound is synced across different actions of the game, whether it’s defeating enemies or platforming sequences. Design is usually pretty hands off when it comes to critiquing music and sound effects, we let those creating the sound have their space to create and we work with what we are given. We received a lot of positive feedback from our focus on sound in Rayman Origins. It definitely compliments the visual style.

Rayman: Legends introduces the new character Barbara, anything you can tell us about her?

She’s a character that a lot of people enjoy playing as. We realized after Rayman: Origins that we didn’t have any playable female characters. Barbara was there to fill help fill that gap. She’s definitely got her own style, with more of a traditional warrior look and moveset. Each of the four main playable characters all handle and control a bit differently. Rayman's flying abilities, Golbox’s large size, and other things like that. It’s easy for players to pick a character as their favorite.

Rayman Legends is a platformer that up to five players can play simultaneously, were they any difficulties in the design process when approaching the game’s multiplayer? 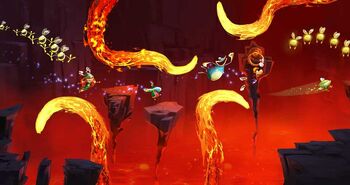 Rayman Legends and Origins both came with the design problems of creating a game that not only is cooperative, but can be competitive as well. This is a game that can be played with one player or five at once. And those players could be beginners or experts. It was our focus to allow a comprehensive experience that allows players from all backgrounds to be engaged in. We try to orient the levels differently, with some horizontal, or vertical. We like to change things up so players are always engaged differently. We try to place various collectable and objectives throughout the level. Players will progress through levels and many things could catch their attention. It's also important to create a forgiving game experience. Players return to bubbles when they die and can easily be saved by other players. We want a cohesive experience that wouldn't favor those familar to playing videogames.

What can you tell us about the storyline of the game?

Without giving too much away, Rayman, Globox, and the Teensies find a series of paintings inside of a tent in an enchanted forest. Each painting itself is of a different environment. Each painting seems to show it’s own world. The four of them eventually get sucked into these paintings and enter each of these different worlds. Each painting has several things to collect and Teensies to save. 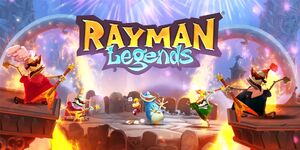 Can you tell us a bit more about controlling Murfy in the multiplayer mode? How does it differ from playing one of the four main characters?

Murfy could be considered the ‘support’ character for all other playable characters. You will use the GamePad screen to control him, and he doesn’t control like the rest of them. His movements are touch-sensitive on the screen. The Gamepad screen is an exact copy of the main gameplay screen. Enemies can be tickled by tapping on them (allowing other players to easily come in and destroy them), ledges and ropes can be moved to help create platforms for other players, and he can also collect Lums by moving him over them. When players die, they are placed into a bubble and Murpfy can easily tap them to awaken them.

Retrieved from "https://rayman.fandom.com/wiki/User_blog:TheBlueRogue/Rayman:_Legends_Developer_Interview?oldid=9484"
Community content is available under CC-BY-SA unless otherwise noted.